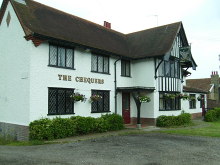 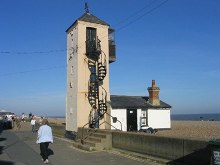 Aldeburgh, The old lifeboat house and lookout, Suffolk © John Winfield
Dating around Bromeswell!
We have one of the UK's largest dating websites - focused on Bromeswell!  There are mature, all age, Asian and Christian singles just waiting to hear from you. Browse and upload your profile FREE ! Want to advertise on this website? Create your advert now.

Laugh and the World Laughs with You

1 Adam was walking in the garden when God said' I am going to make you a companion. She will look after you, cook for you, always have a clean ironed shirt ready for you, will pick up your dirty socks from
where you threw them on the floor and she won't complain when you come back from the pub at 2am'.

Adam said 'That sounds great Lord, but what will that cost me?' God answered 'An arm and a leg' Adam thought for a moment then replied 'What would you give me for a rib?'

2 Eve was walking in the garden when God said 'I am going to make you a companion. He will look after you, take care of you, provide for you and tell you you're beautiful.' Eve said 'That sounds great Lord, Thank you'
God said 'There's just one thing. You have to let him think he was here first'.

Having performed the miracle of resurrection and therefore really annoying the Devil, Jesus and Satan had yet another argument over who was better on his computer. This went on for some days and in the end God was fed up listening to them both bickering on about who was best.
Finally God said “Enough, I will set you both a test that will run for exactly two hours and then I will judge who is the better computer user”.
So Satan and Jesus sat down at their keyboards and typed away, they moused away, they did spreadsheets, they wrote reports, and they sent faxes and e-mails, they sent e-mails with attachments, they sent e-mails with pdf files, they downloaded, they made cards, they printed envelopes and labels, they searched the net. They did almost everything possible to do with a computer. Then just ten minutes before their time was up, lightning flashed across the sky, thunder rolled and the rain poured down, inevitably the electrical power went off.
Satan looked at his blank screen and cursed every known curse word in the underworld. Jesus just sighed. Just then the electricity flickered back on and they both restarted their computers. Satan frantically screamed, “Its gone! Its all gone, I lost everything when the power went off”. Meanwhile Jesus started printing off all the work that he had produced over the last two hours. Satan saw this and became most irate. “Hang about a minute, you must have cheated, how can you manage to be doing that?”
God shrugged, and said, “Jesus Saves.”

The unwed Irish girl settles down in the confessional and begins: ‘It’s a shameful thing I have to confess Father. I am pregnant.’ ‘Are you sure it’s yours?’ says the priest.

A man was selling his horse, and an interested buyer came to investigate.
The seller said,
"There's something you should know about the horse. He stops running when you say, 'Amen,' and he starts running when you say, 'Praise the Lord.'"
"No problem," the other man said, "I'll take it."
The man began to ride away on the horse. He decided to test the horse. "Amen," he said, and the horse stopped on the road just as the other man had said.
"Praise the Lord!" The horse took off running like mad. The rider held on as tight as he could. As he noticed they were racing towards a cliff, he begin screaming, "Stop!!! Stop, you stupid horse!! Whoah!!" Nothing worked. So he began praying, "Dear God, PLEASE let the horse stop! PLEASE!!! AMEN!"
The horse stopped right at the edge of the cliff. With great enthusiasm and joy the man screamed, "PRAISE THE LORD!!"

The woman gambler was praying for a win. ‘Oh God. Let me win the Lottery’
And God answered her prayer with a thundering reply: ‘Meet me halfway old girl, and buy a ticket then.’

A young woman who looked as if she was in a photo finish with the stork, staggered into the maternity wing and grabbed the midwife,’ I need immediate attention’. ‘Due are you ’ said the midwife. ‘No, Church of England.’

A vicar was walking down the street when he came upon a group of about a dozen boys, all of them between 10 and 12 years of age. The group surrounded a dog. Concerned that the boys were hurting the dog, he went over and asked, "What are you doing with that dog?" One of the boys replied, "This dog is just an old village stray. We all want him, but only one of us can take him home. So we've decided that whichever one of us can tell the biggest lie will get to keep the dog." Of course, the reverend was taken aback. "You boys shouldn't be having a contest telling lies!" he exclaimed. He then launched into a ten minute sermon against telling lies, beginning, "Don't you boys know it's a sin to lie," and ending with , "Why when I was your age, I never told a lie." There was dead silence for about a minute. Just as the reverend was beginning to think he'd gotten through to them, the smallest boy gave a deep sigh and said, "All right, give him the dog."


The Power of Prayer

A man decided that it was time to teach his son how to say prayers, so he spent a few nights teaching his son the basics. After the kid had learned them well enough to say on his own, the father instructed him that after he was done with the prayers each night, he was to choose someone special and ask for God's blessing for that particular person.
Well, little kids don't always realise that their pets aren't a person, so the first night the little boy said his prayers, he ended with "And God, please bless my puppy." The father thought that it was pretty cute. However, the next morning the little dog ran out the door and was killed by a car.
That night the little kid asked God to bless his cat when the prayers were finished. And, sure enough, the next morning the cat slipped out and took on the biggest dog in the neighbourhood and became its breakfast. The father had started to make a connection here, but decided that it was just coincidence.
But when the kid asked God to bless his goldfish, the father couldn't wait for morning so that he could check up on it. As soon as he looked in the bowl, he saw the fish floating upside down on the top.
That night the little kid ended with "God, please give an extra special blessing to my father."
The father couldn't sleep. He couldn't eat breakfast in the morning. He was afraid to drive to work. He couldn't get any work done because he was petrified. Finally home time came and he walked home, expecting to drop dead any minute.
When he arrived home, the house was in a mess. His wife was lying on the couch still dressed in her robe. The dishes from breakfast were still on the table and the father was furious. He started shouting at his wife, telling her that he had had the worst day of his life and that she hadn't even got dressed. She looked at him and said, "Just Shut up! My day was even worse. The Postman had a heart attack at our front door!"


Thought for the Day

Never complain about growing old, many are denied the privilege.

This Microportal is built on the 2day Microportals platform which provides you with 3 click access to local and global information crucial both to your personal and working life. The platform provides live local data on transport, what's on, accommodation, eating out, shopping, sport, religion and weather as well as comprehensive reference and resource sections including TV, radio, online shopping, route planning, health, education and more.